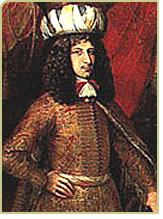 Dimitrie Cantemir was born in 1673 in Silisteni, the son of Constantin Cantemir, governor of Moldavia, which was classified as a privileged state in the Ottoman administrative system. When his father, coming from a modest village family, was elected governor by the Moldavian boyars, Cantemir's life entered a new period. Learning Greek and Latin from the monk Yeremiye Kakavelas, the young Cantemir educated himself in philosophy and literature and entered the intelligentsia of the period. When his first political endeavor ended in failure (as did his last), he came to Istanbul, where he was to spend a major portion of his life.

In this city, where he lived until 1710, he continued his education in the Ottoman Palace as well as in the Greek Patriarchate. Cantemir clearly achieved a wide circle of acquaintances during this time, and of the teachers he studied with, some of the first to come to mind include philosopher and geographer Meletius of Arta, his Arabic teacher Nefioglu, and his mathematics and Turkish teacher Esad Efendi of Ioannina. He was known to be very talented in language, and studying the eastern languages, he also learned the subtleties of eastern music from Kemani Ahmet Efendi.

Thus, Cantemir soon became a sought-after personality and a sine qua non in the artistic circles of Istanbul. Having participated with the Moldavian units of the Ottoman forces in the war of Zenta, Cantemir was appointed governor of Moldavia upon the war with the Russians which began in 1710.

During the course of his governorship, pursuing a dream for which the political reality was not yet ripe, he went into collaboration with the Russians in 1710. The extinguishing of this dream in Prussia in 1711 set the stage for the dramatic last period of his life. He died on August 21, 1723, a famous man, not only for his political personality that took shape under the unique conditions of the period, but also as a man of culture.

But what most distinguishes him historically is the fact that he notated many musical pieces, thus contributing to the knowledge of the East in Europe. Cantemir's writings on the East reached the second largest reading public after the works of Paul Rycaut on Ottoman history, published in London in 1668. His work, written in Medieval Latin, was the first systematic treatise on the Ottoman State. In his work, Incrementa atque decrementa Aulae ot homanicaet, he brought a new approach to the philosophy of history, and brought attention to the fact that the rise and fall of states followed a natural course parallel to that of living beings. Thus he submitted that states experience a period of rise and of decline.

As a result of Prince Cantemir's contributions as an Orientalist, the registry for his membership in the Berlin Academy of Science, for June 11, 1714, read: "Residing in Istanbul for twenty years, he learned the eastern languages, wrote poetry in the Turkish style, composed music, and won the love of the Sultan, Vezir, and others of high rank."

Another aspect of the historian Cantemir that inspired him as a man of culture was his passion for eastern music, and the works he produced on the subject. In the musical dictionary titled Historisch-biographische der Tonkünstler, published in 1790 by Ernest Gerber, he is mentioned by name, an indication of the importance of his works on music. He inherited his musical talent from his father Constantin, who in his spare time played Moldavian folk songs on the flute. Dimitrie passed a similar love for music on to his children as well. His oldest daughter Maria played harpsichord, and his son Antioche was a singer in Moscow and composed several works.

According to what we know today, the first master from whom he learned the basic concepts of music was the Cretan Kakavelas, who was also a composer. His musical talent was not noticed only by his teachers; he did not escape notice of anyone he met. So when he visited the Polish ambassador Raphael Leszczynski visited Ias, he noticed the young Cantemir's musical talent. The fact that in Istanbul, he studied eastern music for fifteen years under Kemani Ahmet is a clear indication of his level of interest in the subject.

At the same time, he took lessons from the well-known composer and tanburi, Anjeliki.

Cantemir composed thirty-six pieces, including two pesrevs, eleven saz semais, two aksak semais and one beste. When Sultan Ahmet II appointed him governor of Moldavia, he composed a semai in the makam Neva dedicated to the Sultan, and received various presents as a reward. Among the works attributed to Cantemir is a Mevlevi ayin that was performed by the Galata Mevlevi dervishes and was the subject of much debate during its time. The monk Toderini states that this piece was written by Cantemir under the influence of old Turkish literature, in the fashion of examples in the possession of the French Ambassador M. Ferriol, in the European notation system. Another musicologist who believed the ayin was Cantemir's, Georges Brezaul, arrived at this conclusion based on pieces he determined were from various parts of Moldavia. According to the same writer, the Mevlevi ayin influenced the music for one of the ballets in Mozart's opera Abduction from the Seraglio. "It appears that Mozart became acquainted with the Mevlevi ayin, from F.J. Sulzer, who recorded this ritual into history. This view is shared by other Romanian historians. De Ferriol however, considers this music to be by Sieur Chabert, who was a master of music and who laid the foundation of this art." Actually, this claim was not so untenable, as De Ferriol, who was known to be interested in eastern culture, had asked the musician Chabert to notate this dervish ayin. Similarly he had asked the painter Vanmour to paint his picture, now on exhibit in the Amsterdam National Museum. It is possible that Cantemir, who knew De Ferriol, had connections with the French embassy in Istanbul and at the same time had a deep interest in eastern music, helped Chabert.

Considering how established the master/apprentice tradition was in the Ottoman Empire, Cantemir's acceptance as a teacher of music beyond the realm of theory, is significant. Among his students was the head treasurer of the Empire Davut Ismail Efendi, and treasurer Latif Çelebi. Others included talented young men such as the Greek nobleman Ralaki Eupragiotes, and the Turks Tasçioglu, Sinik Mehmet and Bardakçi Mehmet Çelebi. Evidently uninterested in western music, Cantemir claimed that the meter and proportion of words in Turkish music were more perfect than in European music. Inspired by this thought and likely at the direction of his close friends, he authored a book on Turkish music theory.

Written in 1700 and known as the Kantemiroglu Edvari, the entire title of the book, dedicated to Sultan Ahmet II, is Kitabü Ilmi'l musiki ala vechi'l hurufat. The work consisted of two main volumes. The first volume contained technical information on makams, intervals and usul. The second volume contained the notation of 316 pesrevs, nearly 40 saz semais and a few bestes composed in the 16th and 17th centuries in forty-eight makams.

Taking as its basis the tanbur, considered a standard instrument in Turkish music, the book summarizes the theoretical principles via the main scale, and onto the theoretical structure thus reached, adds new basic theoretical principles. With this approach, the book was a turning point in Turkish theory. Cantemir's theory, which was based on the experimental method kavl-i cedid or kavl-i hakir, conflicted with traditional theory. In the opinion of Popescu-Judetz, the new theory was in opposition to the abstract older theory that had been systematized by musical authorities of the Middle Ages. The work, which addressed its subjects according to a logical classification both specifically and generally, took a two-sided comparison as its approach. Comparing on one hand the elements of music with those of language by means of a linguistic comparison, it also made a comparison by dissecting its subject into parts in the manner of medical science.

With this approach, Cantemir departed from earlier researchers on theory including Mahmud b. Abdülaziz, Seydi and Bedr-i Dilsad. His predecessors appraised Ottoman music as a continuation of the Islamic musical tradition, and constructed their theories on this understanding. In his book however, Cantemir tended to approach Ottoman music as a school in itself. In addition, writing a good number of pieces in the notation he devised himself, he prevented the loss of these pieces to the ravages of time.

It is clear that Kitabü Ilmi'l musiki ala vechi'l hurufat aroused interest in Ottoman music circles. It is also known that his notation system was popular among composers. Though he says I hear that my work remains popular among Turkish who want to learn music, the monk Gian Battista Toderini writes in his work Letteratura turchesca that during his stay in Istanbul, it was extremely difficult to find a copy of his book. According to the same writer, because Turkish theory was difficult, Turks didn't use the Cantemir notation, and continued composing with the old usuls.

However it is know that there were musicians who did not agree. For example, Abdülbaki Dede, sheikh of the Galata Mevlevi dervishes, who wrote such works as Tahkik ve Tetkik, Tahririye, used thirty-eight symbols that differed from the letters used by Cantemir, however the values he used were identical to those assigned to the letters by the Moldvian prince. The many debates over Cioranesco's claims in his comprehensive research on the subject aside, "Cantemir made an important contribution to the theory on the subject of duration and intervals with which the musicians of his time were struggling; which found its solution in the scale devised by Werckmeister in 1691 and with Bach's finding of the well-tempered clavichord, which proved Werckmeister correct."12 This was the reason for the great attention focused on him during the period following his work.

Cantemir suffered a serious blow from his unsuccessful political endeavors, yet remained active in music till the end of his life. According to a historical chronicle written in 1743 by the Crimean Molla Haci Abdulgaffar, the genius, taking refuge in Russia after the Prussian defeat, had one of his segah bestes played, and cried. During the period he spent in the service of Tsar Peter, Cantemir continued his musical endeavors. Peter, passionate about music and loving to sing church hymns, took a chorus composed of nearly twenty people on his journeys. He often sent students abroad to gain expertise and receive a good education. At this point he played an important role in having Cantemir, who had a broad knowledge of Slavonic and mastery of the Greek language and music, translate the Byzantine liturgies for the Russian Orthodox Church. In addition to this, he designed an instrument that resembled the "mikyas-i savta" (monochord) developed by Turkish music theoreticians to give the correct tone intervals.

According to some sources, he wrote another piece of Turkish music during this period, which was lost in a shipwreck in the Caspian Sea; however there is no sound historical evidence available to backup this claim.