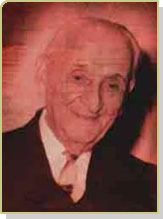 (1902-1995) Cevat Memduh Altar completed his primary and secondary education in the Alemdar Numune Mektebi and the Nisantasi Sultanisi, after which he went to Germany for further studies in 1922. Returning to Turkey in 1927, he taught classes in music theory and the history of art and opera at the Ankara Music Teachers' College. Among the founders of the Ankara State Conservatory, Alemdar went on to serve in a variety of positions, including Director of the Radio Administration (1943-51), State Theatres (1951-54) and General Administration for the Fine Arts (1954-60). Altar prepared the first narrated concert programs for Turkish Radio. He was among the founders of the UNESCO Turkish National Commission, and received the French Officier d'Académie and German Schiller medals. Some of his published works include: Goethe ve Sanati (Goethe and his art, 1944), Georges Bizet ve Carmen Operasi (George Bizet and the opera Carmen, 1948), Ludwig van Beethoven (1952) and Opera Tarihi- 4 Cilt (History of Opera, Volume 4, 1970-82-93).