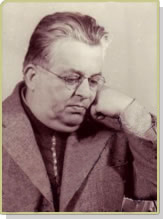 Born in Istanbul’s Şehzadebaşı quarter, Mahmut Ragıp Gazimihal began his education in the Hadika-i Meşveret Rüşdiyesi, and continued at Veva Sultanisi Middle School and the French College in Kumkapı. He was forced to leave his schooling for a time due to an accident at the age of 14, and finished high school later in Ankara.

While a student at the Kumkapı French College, he began studying music theory with the composer Merceiner. His interest in polyphonic music grew, and he performed canons and duets with his friends. Believing that he could only receive a methodical music education abroad, and with the financial support of his father Dr. Yusuf Ragıp Bey, he went to Germany and enrolled in the Stern Conservatory in Berlin. During his four years in Germany (1921-25), he had the opportunity to study musical documents at the Berlin library. He conducted intensive research and followed musical activities in Europe; and writing articles on the subjects, published them in Turkish newspapers and magazines. In 1925 he returned to Turkey, where he taught music in several schools. A year later, completing his musical education, he went abroad again, this time to Paris, where he entered the Scolia Cantorum and became a student of Eugène Borrel. here he studied violin, music history, harmony and counterpoint, and attended composition courses by Venson Dhendi. After two years in Paris, he returned to Turkey in 1928.

In 1929, at the beginning of the school year, he was appointed music teacher at the Istanbul Girls College and Galatasaray College. He continued in these positions until 1932, when he was accepted into the Ankara State Conservatory, where he taught theory of violin music, opera and ballet. He also taught history at the Gazi Institute of Education and the Ankara Military Music School. He retired voluntarily in 1961, and died on December 13th of the same years.

M. Ragıp Gazimihal was among the founders of Turkish musicology; and was one of the first to produce western-oriented musicological writings. Gazimihal had a broad area of knowledge and study, ranging from the Asian and Anatolian roots of Turkish music to music politics, organology and music collecting. He shared these projects with his students and published as well, becoming the most published musicologist in the country. In his book “History of Turkish Music,” which he began in 1956, he examined the formerly unresearched subjects such as the origins of Asian Turkic Music and the influences of Elamitic, Hittite and Sumerian music on Turkish music; and outlined a method for the study of Anatolian folk music.

Gazimihal was a member of several music and folklore societies at home and abroad, including the Société Française de Musicologie”(France), “International Folk Music Council” (England), and “Halk bilgisi derneği” (Turkey).