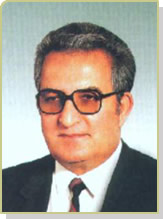 Muammer Sun began his musical training in 1946, in the Military Music School. He continued his education in 1953 in the Ankara State Conservatory, where he became a composition student of Adnan Saygun. During these years he also studied piano with Mithat Fenmen, orchestral conducting with Ferit Alnar, folk music with Muzaffer Sarısözen, traditional art music with Ruşen Kam, and Turkish music harmony with Kemal İlerici. Completing the advanced term at the Conservatory’s composition department in 1960, Sun was appointed that same year as a teacher of theory and harmony at the same institution. In 1967 he began work as an advisor at the Undersecretariat of Culture, and became active in the area of folklore, taking part in folklore studies conducted by TRT and ODTU, teaching at the Gazi Music Education Department as well. Selected to serve on the TRT Board of Administration in 1969, the composer was a pioneer in the development of this institutions central music authority, art awards and chorus system. At the same time, he worked effectively to secure the reorganization of the elementary music programs at the Ministry of Education, and was instrumental in the founding of youth choirs. With the support of the prime ministry, Sun was also a major participant in the effort to found hundreds of children’s choruses throughout Anatolia. In 1972, Sun left his official positions to conduct private studies in Istanbul for a time. In 1975, he entered the Izmir State Conservatory, and in 1987 was brought to the Ankara State Conservatory to teach composition. During the 1990s, he served as Musicology Department Head at the same institution.

Active in Turkey’s musical policy, particularly during the 1960s and 1970s, Muammer Sun reached a wide public with his compositions and over the forty year course of his artistic life, worked to realize his musical goals through such routs as educational music, the indirection function of radio and television in this area, and film soundtracks. In his book, Türkiye’nin Kültür, Müzik, Tiyatro Sorunları (Turkey’s Cultural, Musical and Theatrical Issues), he went beyond simply “evaluating the situation,” to recommend realistic solutions, This brought a broad response, and resulted in a broad-based unification of our composers, intellectuals and educators. He is of the second generation of those working as Composers/Musicologists in the Turkish musical world.