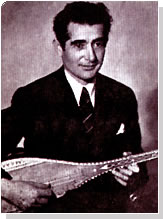 Muzaffer Sarisözen was born in 1899 in Sivas. A graduate of the Istanbul Municipal Conservatory, he began doing collection work on his own while teaching in Sivas High School. In 1938, he was appointed director of the Ankara State Conservatory Folklore Archive, and worked ceaselessly for seventeen years collecting folk music in all parts of Turkey. He notated a significant portion of the material he collected, and taught it at the Conservatory. Sarisözen directed and taught the Yurttan Sesler (Sounds of the Motherland) ensemble at Ankara Radio, in which he collaborated with Mesut Cemil to apply a new approach to Turkish folk music. He published three books: Seçme Köy Türkerleri (Selected village folk songs, 1947), Yurttan Sesler (Sounds of the motherland, 1954) and Türk Halk Musikisi Usulleri (Rhythmic patterns of Turkish folk music, 1962). He died in 1963.