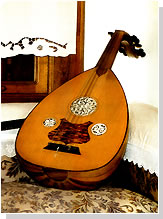 The ud is a large-bodied, short-necked instrument belonging to the lute family. Besides Turkey, it is played in the entire Arab world including Tunisia, Morocco and Algeria, as well as Iran and Armenia. In Iran, it is known as the barbat.

HISTORY: The ud is considered one of the oldest string instruments known to man. Its first ancestors are thought to have been made in Ancient Egypt (1320-1085 B.C.), because a bas-relief from that period depicts an instrument resembling the ud. This antique ud's body, like those of later uds, was likely made of a single hollowed out piece of wood, and smaller than those of modern uds. This is the instrument that the Iranians called barbat.

The word ud comes up for the first time in Arabic texts of the 7th century. But in later Iranian and Arabic texts, the terms barbat, ud and tunbur (tanbur) are used interchangeably. It is known that Fârâbî played ud, and made some changes to the instrument. The most important of these is the fifth string he added to the ud's formerly four strings, which were tuned in fourths.

The frets that had been preserved until Fârâbî's time were abandoned toward the end of the 10th century, and earlier players used a wooden plectrum. The famous Anadalusian musician (9th century) replaced this with an eagle's wing feather. Today, flexible plastic picks are generally used.

Though it was used in certain earlier periods, it was during the second half of the 19th century that the ud took a definite place among the Turkish classical instruments. Today it is played by several virtuosos in a wide variety of styles.