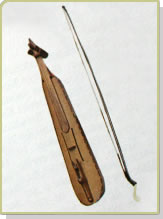 This is the most widespread folk instrument of the eastern Black Sea region. It can be played either seated, resting the instrument on the knees, or standing up supported solely by the palm of the left hand. It is tuned to fourths, and has a range of about one octave. The main feature of the Black Sea kemençe is the predominance of parallel fourths in its playing.

Besides these two fiddles, there are other bowed instruments played in Turkey as well. One of these is the Azeri (Azerbaijan) kemençe, which resembles the kabak kemane but with larger overall dimensions, especially in the body. Another is the tirnak (fingernail) kemençe, a pear-shaped fiddle played especially in the western Black Sea in the region around Inebolu, Kastamonu and Çankiri, as well as by the Yörüks around Antalya. It is so called because its strings are stopped from the side by the fingernails of the left hand rather than by pressing from above.