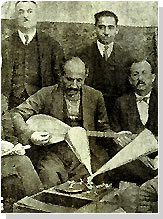 The regional music research that began in the early 19th century in Europe, emerged under the influence of a variety of new modes of thought.  Foremost among these were social and political events such as nationalism, industrialization and enlightenment.  However, there was no such social movement to be seen among the people living in the Ottoman Empire.  The rich folk culture existing in the Empire in the early 20th century did attract the attention of certain western merchants, ambassadors, state officials and travelers, as well of a few people living in the country, and non-scientific works were carried out by these people.

By the 20th century, we see the gradual emergence in the Ottoman Empire of nationalistic movement, the birth of a need on the part of the people, in search of a new identity, to research and learn their culture.  At this point, alongside efforts within the Greek, Armenian and Jewish communities to research their music, an interest in Turkish folk culture appeared, and thus in Turkish folk music as well.  The interest shown in Turkish folklore by the intellectuals of the time would eventually be replaced by serious research, and a broad archive of Turkish music would be created.  Intellectuals such as Ziya Gökalp, Fuad Köprülü and Riza Tevkik Bölükbasi portrayed sensitivity towards folk culture and music as a national duty, and thus became the most significant motivating force behind folk music research.  Imbued with a folk spirit, the new Turkish youth would embrace their national identity even more strongly.  The inevitable result of this view, and the social needs of the period, was the beginning of folk music research projects.  The founders of the young Turkish republic, in direct opposition to the Ottoman Empire, realized very early how valuable a cultural artifact folk music was, and immediate began work in this area.  In this article, we will provide a chronological list of official collection efforts.  Private collections will be addressed in another article.

Today, it is known that great numbers of collections were made by independent individuals with an interest in folk music.  We are not capable of addressing this type of private collection efforts here, because the number of songs and other pieces collected by private individuals is over 10,000; and a full list of them is not feasible now.  Besides these, the number of official collections is well over 10,000 as well, and this work still continues today.

Of the many folk music recordings made worldwide upon the invention of the phonograph, one of the first was in Anatolia in 1901, by Felix von Luchan, in Ayintap.  We know that some such vocal recordings were made in Istanbul as well during that period.  But the first planned and government supported collection effort was that of Maarif Velaketi in 1925.  Seyfettin Asaf and Sezai Asaf also collected folk music in western Anatolia without a phonograph.

With the arrival in Turkey of the phonograph, followed by other recording devices, collection efforts became more systematic.  The first collection using a recording device was made by the musical institution known in that time as the Darü'l-Elhan.